Pardon the super-lateness of this post. The baby Would. Not. Nap.

So, you may have seen this image making the social media rounds last week:

And if you were lucky, you saw one of many excellent rebuttals, like this one, explaining why 1) this check is nonsense and 2) common core math is not nonsense. Common core math is not your enemy. It’s ninja math for those of us who are not natural ninjas. If I’d had this style of math instruction in elementary, I would have found algebra to be a LOT easier.

Anyway. I thought I’d throw together a few arts-integrated math activities around exactly the kind of mathematical thinking behind ten frames, the math tool that the father was lampooning when he wrote that check. (If you want to know more about ten frames, which are actually pretty cool, I invite you again to check out this article.)

One of the most basic principles in common core math is building number sense – learning how numbers come together and break apart, and how you can re-group them in multiple ways to make your calculations easier. Hence, the focus on grouping things into tens. So here are three arts-related ways to get your students thinking about the base-ten system:

Notice that there are 12 squares, so this will require some creativity on the part of your students. How many ways can you make ten in this painting? The simplest 10-base number story might be: Kandinsky painted 10+2 squares with circles inside. Or you could say Kandinsky’s 12 squares – 2 squares = 10. Or they could count rings – 6 full yellow rings (not counting partially yellow or partially ring-like) + 4 full black rings = 10. How many rings are there in total? How many tens in that number? And this now becomes an interesting discussion of attributes. What are we counting as a ring? Does it count as a ring if it’s round on the inside but square at its outer edges? What about the round centers? Are those rings or something else? It will also require them to look closely at the painting, and look again, and again, which is what art is all about.

Variation: print out color copies of artwork and allow children to change the painting (cray pas or markers might work best) in order to create a math story. Changing the artwork of other artists has a long tradition, so this is well within the parameters of visual art instruction. Take for example, Kim Dong-Kyu, a Korean illustrator who added iPhones and other gadgets to a number of famous paintings, like Van Gogh’s Old Man In Sorrow:

Or the many people who’ve taken to adding monsters to thrift store landscapes: Some other good paintings for making math stories: 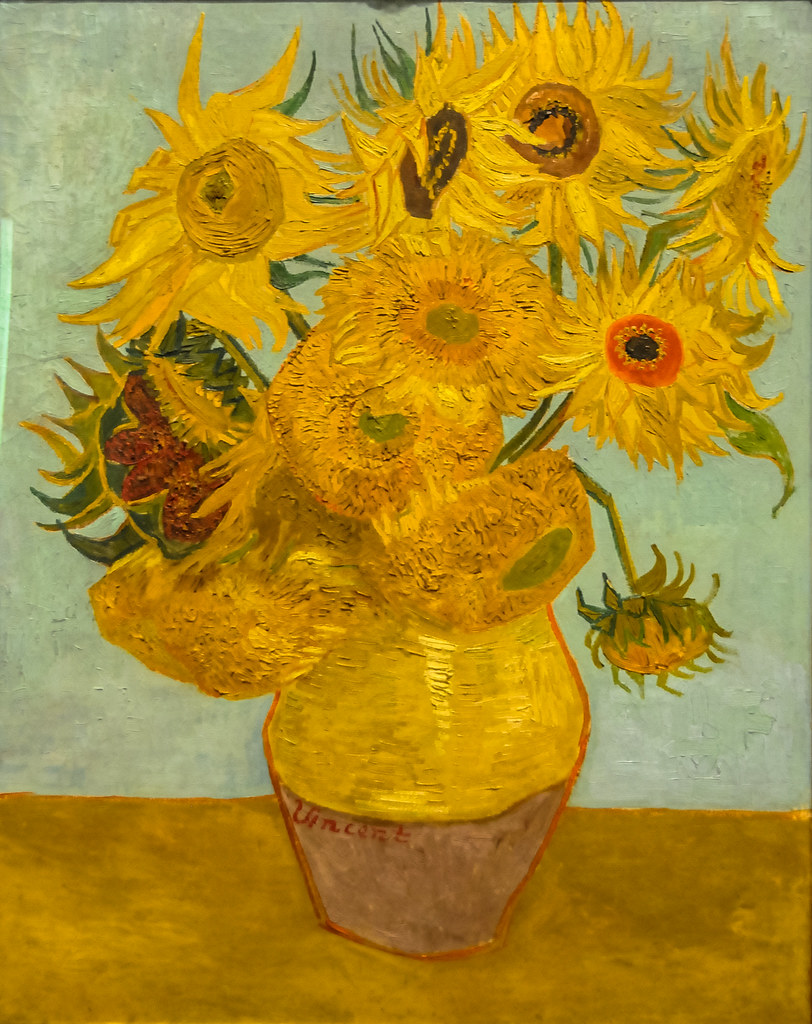 You could use an old hundred-chart laying around, or make your own board with any number of rows of ten. Students start on one end and roll a standard two-die set, then count their pieces forward that many spaces. Every time they cross a tenth space, they have to write a number sentence describing their turn. For example, on his third turn, Elias has started on number 16. He rolls an 8. In order to complete his turn, he has to cross the second ten (#20), and his number sentence reads 16 + 8 = 10 + 6 + (4 + 4) = 10 + 10 + 4 = 24. Or however you want the break down and notation. Double points or an extra turn if you land exactly on a tenth square, and to finish the game you MUST land exactly on the last ten-square, which makes a good subtraction problem (what number do I have to roll to land on the right spot and win the game?). You could have opponents start from opposite ends of the board and meet in the middle, or have everyone race in the same direction.

Variation: If you’re feeling ambitious, make a big floor game board, and have students play this while walking on the squares and counting their steps. It doesn’t have to be a grid – you could lay it out like a sidewalk that turns every tenth square, thus expanding around the room. (I got this idea from my own synesthetic numerical map – I was 35 years old before somebody told me that not everybody carries a number map in their head and has to walk out problems on the map before translating it into standard notation. Note that your students will also be neuro-diverse – common core math strategies give us extra ways to find our way to standard notation.)

Variation 2: Have students take that grid or walkable game board and make it into a treasure map. They have to write the directions as a math story.

3. Dance. Ok, I’m cheating on this one, I don’t have my own ideas here. Because Malke Rosenfeld already has all the ideas over at Math in Your Feet. Seriously, check out her work, it’s amazing. Rigorous, fully integrated, fun, it’s deep mathematics and real dance skills together. I want to be Malke Rosenfeld when I grow up.