It’s back to school time, which, for early elementary teachers, and sometimes for upper elementary teachers, means back to the ABCs. That’s 26 letters times 2 (for upper and lower case), to be matched in various combinations with 44 separate phonemes. That’s 96 distinct factoids necessary for reading, not counting the skills needed to put them together to make words and meaning. No wonder it can be intimidating for lots of little people every year.

But all that memorization can feel friendlier and easier to master when approached creatively. Here are 6 ways to get the alphabet into your brain through your fingers, your body, and even your mouth.

Of course, making alphabet books isn’t just for the professional writers out there! Your kids can have a lot of fun designing their own alphabet book, either individually or as a class. Here are a couple ways to go about it. 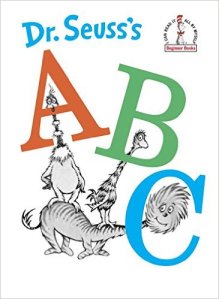 A Very Seussical Alpha-Monster Book: Kids love Dr. Seuss’s rhymes and silly creatures. You can do this as part of a Dr. Seuss author-study, or just read-aloud Dr. Seuss’s ABC a few times. Point out all the silly imaginary creatures that Dr. Seuss invented for his stories. In the ABC book alone, there is a duck-dog, a Fiffer-feffer-feff, a tuttle-tuttle tree, and a Zizzer-zazzer-zuzz. For each letter, brainstorm a list of words that begin with that letter, then mix-and-match them to make nonsense words. For example:

This list could yield appocados, armigators, avodillos, etc. Then students choose a “monster” name and create an illustration for it. Collect these, add a construction paper cover, and bind them with staples, string through punched holes, or in a presentation folder. You can have each student create their own for each letter, and keep the accumulating pages in individual folders, or you can assign each student a letter and create a class book. 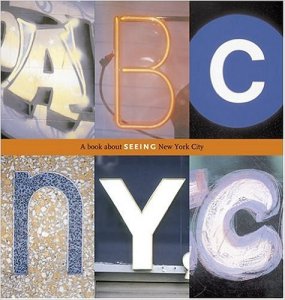 The Alphabet Photo Essay – Using ABC NYC by Joanne Dugan or a similar book as a model, take students on a walk through the neighborhood, and let them photograph letters in their neighborhood, whether those letters are intentional (as in letters in a sign) or accidental (a tree branch that looks like the letter F). Make sure you practice in class getting “good” photos, which means the letter shape takes up as much of the screen as possible. After your letter walk, print them out and assemble them into books.

You can also assign the photos for homework, since nearly everyone has smartphones these days. Have the students email you their photos. Have a contingency plan for those students who might not have access to a digital camera. Either have a few donated ones on hand to lend out (you can get them donated from techie parents who always upgrade to the newest model), or allow those students some time to take a walk around the school taking photos with a classroom camera so they can still participate.

For time management, if you can’t assign the letters for homework, then I wouldn’t take a class walk for every single letter you study. Instead, I would either take a walk for every group of five letters or so, or I would do this one as a class project, where each student is looking for a different letter, and you compile them back in the classroom together.

Did you know that your brain carries a very detailed map of your body in a vertical sliver called the somatosensory cortex? It’s how your brain knows if you have your arms crossed even if your eyes are closed, and it’s one of the earliest parts of your brain to develop (thank you, Lise Eliot, for that info). What better way to get the alphabet into a kinesthetic learner’s brain than by activating this map and linking it to literacy?

Hence, we dance the alphabet. There are a number of ways to do this, and they vary on two spectrums, from more teacher-directed to more student-directed, and from full-body to hands only. Each variation has benefits.

Student-directed approach: You show the students the letter(s) you want them to learn, and they find a way to mimic the shape with their bodies (or hands, if you’re doing hands only). The benefits of this approach is that they’re forced to really look at each letter and find an analogous shape in their bodies, so when they figure it out, they really own it. You can give them a couple minutes to figure it out, walking through to make sure no one is getting it totally wrong (remember that their letters will appear backwards if you’re facing them directly), and maybe talk about how there is (usually) more than one good way to make a good letter shape. Maybe choose a few students who had different methods and have the class talk about the merits and difficulties of each pose (maybe one pose looks most like the letter, but another one is a close approximation and more achievable for the less-flexible). Then they have to do their choice of pose while saying the letter sound.You can have the class vote and agree on one pose if you want uniformity of practice moving forward.

If you are doing more than one letter at once, or after you have learned several letters, you can have students spell words in groups, with each student creating a different letter (and the class has to “read” the word – their letters will be backwards if they face the class, so have them face away), or have them “choreograph” a word, with each student doing all the letters, and saying the sounds for each. You can also have them dance the word faster and faster, blending the sounds together (I recommend doing this in small groups with lots of space). You can also play this game for review.

Teacher-directed approach: You show the letter, and show the pose that you want to represent the letter. The benefits of this approach are mostly in time management. If you can’t get away with a full movement-exploration lesson, this takes about 1 minute per letter to teach, and can be an easy way to stretch the class during transition times without taking away from your primary lessons, and it still gets the alphabet into their bodies. It’s also easier for you to monitor that everyone is making a recognizable letter – when they’re all attempting the same pose, it’s easy to see if someone has a backwards or otherwise problematic pose. It’s also easier for them to self-correct because they can measure their pose against their peers’.

With teacher-directed, you can teach one letter at a time (easier for you, especially if you’re not accustomed to incorporating movement), or you can dance the whole alphabet from the beginning, say, instead of singing the ABC song. It still only takes like 2 minutes. Here’s my (all-capital, full body) alphabet, which is only slightly modified from a dance alphabet I learned at an Empire State Partnerships seminar 10 years ago and can no longer remember the name of the organization that taught it to me (if it’s yours, please let me know, I’d love to credit you!):

Remember that if you’re modeling the pose and facing the class, you have to do the letter backwards so it will look correct to them. If this is too hard, you can face away from the class so they’re looking at your back. And I totally did both K and Z wrong in this video, and two different versions of R. It’s been a while, haha. Fortunately, I believe in modeling imperfection, and don’t worry, the students will correct you. 🙂

Both student-directed and teacher-directed movement activities can be either full-body or hands-only. The benefits of full body – more exercise, more fun. Hands-only is safer and easier to manage if you have more than a few wild ones. Plus, you can link it to ASL if you wish.

Play alphabet card games. This is especially easy if the students are already keeping alphabet flashcards in their desks for other purposes.

Game 1: Two students use a single alphabet deck, or they can combine their decks. They turn over the first card and say the sound associated with it (if it’s a double-sound card, they can use either sound, or you can make up a special rule about having to say both). The first student to say the sound gets to keep the card. If they tie, they turn over the next card, and the first student to correctly say the sound gets to keep both cards. The student with the most cards at the end wins. Builds letter/sound recognition.

Game 2: Requires a deck of a few letters, repeated many times. Especially good to use with easily-confused letters like b, d, p, and q. I would say no more than four letters, and at least 10 of each. If you’re using d with p, which are the same shape turned around, draw a line where a writing line should go so they know which way is up. Split the deck in two, each student gets a pile, which they place face-down. The two students each take their top card and place it face-up in the middle at the same time. If they don’t match, the students continue to flip cards over until they get a matching pair. If the letters match, the first student to slap the cards and say the correct sound gets to keep all the cards that have been flipped. The student with the most cards at the end wins. Builds letter/sound recognition and gives practice clarifying easily-confused letters.

Cook up some letter recipes. Make sure you know of any food allergies and other food restrictions before using cooking in the classroom. Once I have a recipe that everyone can participate in, my usual rule is that they have to make it, they have to try it (and if they absolutely refuse, they have to at least sniff it), but they never have to finish it. I like using this as an opportunity to introduce healthy foods the kids might not be familiar with yet. Even if they don’t like it the first time, people learn to like foods by encountering them over and over again in different ways, so they should start somewhere. Why not with you? And -surprise! – they might find something they like!

Apple, Apricot, Avocado, and Arugula salad. Also almonds if there are no nut allergies.

Bagels with butter and blueberries and/or blackberries. Hint: one bagel can be split 8 ways if it’s cut in half and then the halves are cut into fourths. So everyone gets a “bagel bite.” Saves LOTS of money.

Delicious donut dragon with dates. Cut the donut in half lengthwise and crosswise, so you have 4 C-shapes. Place 2 end to end to make an S, which is the dragon’s body, then take the remaining two and place them as “wings.” Here, I cut the wings in half again because I just thought it looked better. You could also use Doritos for wings, that would look cool. Use a date for the head. I used a prune because that’s what I had in the pantry, but it’s about the same size. Students can each make their own, or they can make in groups of 4, and then everyone only gets 1/4 of a donut, which will save you both money and sugar-jitters.

Egg salad with edamame on the side.

So – I’d love to hear how YOU make the ABCs creative! What are your favorite ways to keep the kiddos’ interest?