Returning to our unit on time travel, we moved on from Ancient India to Ancient China, where we spent two one-hour sessions.

The focus for the first lesson lesson was Chinese painting:

2. The Chinese consider the empty space to be as important as the painted space.

3. Nature is often a focus.

We brought up a bunch of examples from Google images on the smartboard for them to see, like these: 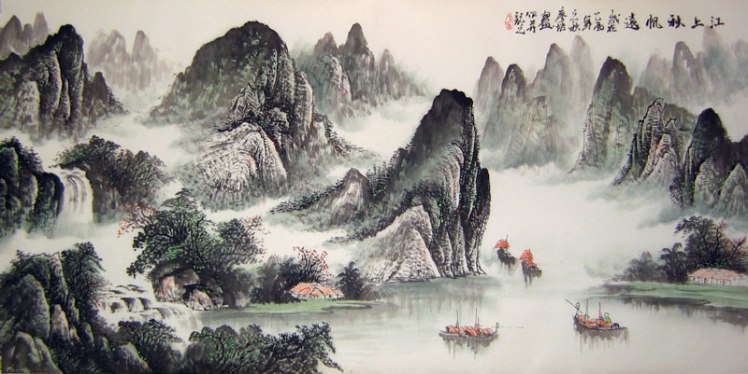 Then I modeled this painting for them:

Benefits of this as a painting lesson:

1. It’s achievable for most of them.

2. Because there’s  a lot of empty space, they finish their paintings pretty quickly, so it’s a short exercise.

3. Watercolors are pretty easy to clean up. Except for me that day because I FORGOT to bring my trusty organizing roasting pans.

For the second lesson, we focused on Confucius. The historian in me really wanted to give him a fully nuanced, fleshed out presentation, but we had one day with second graders, so he pretty much got painted as a Chinese philosopher (we talked about philosophers in Ancient Greece already, so they were familiar with that term!) who said a lot of really wise things and whose sayings, or proverbs (“proverb” was our vocab word for the day) are still followed by some people today.

I gave some examples of proverbs. The most famous one is Confucius’s version of the Golden Rule:

Do not do to others what you would not want done to you.

You can google “sayings of Confucius” and come up with a bunch more, but be careful, because there are also lots of sayings attributed to Confucius that originated as internet memes, not actually as sayings of Confucius. Here are a few more authentic ones, from bartleby.com:

“Thrice daily I ask myself: ‘Have I been unfaithful in dealing for others? Have I been untrue to friends? Do I practice what I preach?’

“The young should be dutiful at home, modest abroad, heedful and true, full of goodwill for the many, close friends with love; and should they have strength to spare, let them spend it upon the arts.”

“Not to be known should not grieve you: grieve that ye know not men.”

“Study without thought is vain: thought without study is dangerous.”

“Listen much, keep silent when in doubt, and always take heed of the tongue; thou wilt make few mistakes.”

Some of these are easier for 8 year olds to understand than others, obviously, but we discussed how sometimes there is value in having to puzzle out the meaning of a proverb. I gave them some time with the proverbs to see if they could wrangle some meaning from them, and then they were charged with writing their own.

Honestly, the writing of proverbs did not go as smoothly as I wanted. If I could do it over again, I’d probably give them more time, and then have them make an advice video modeled after this one: